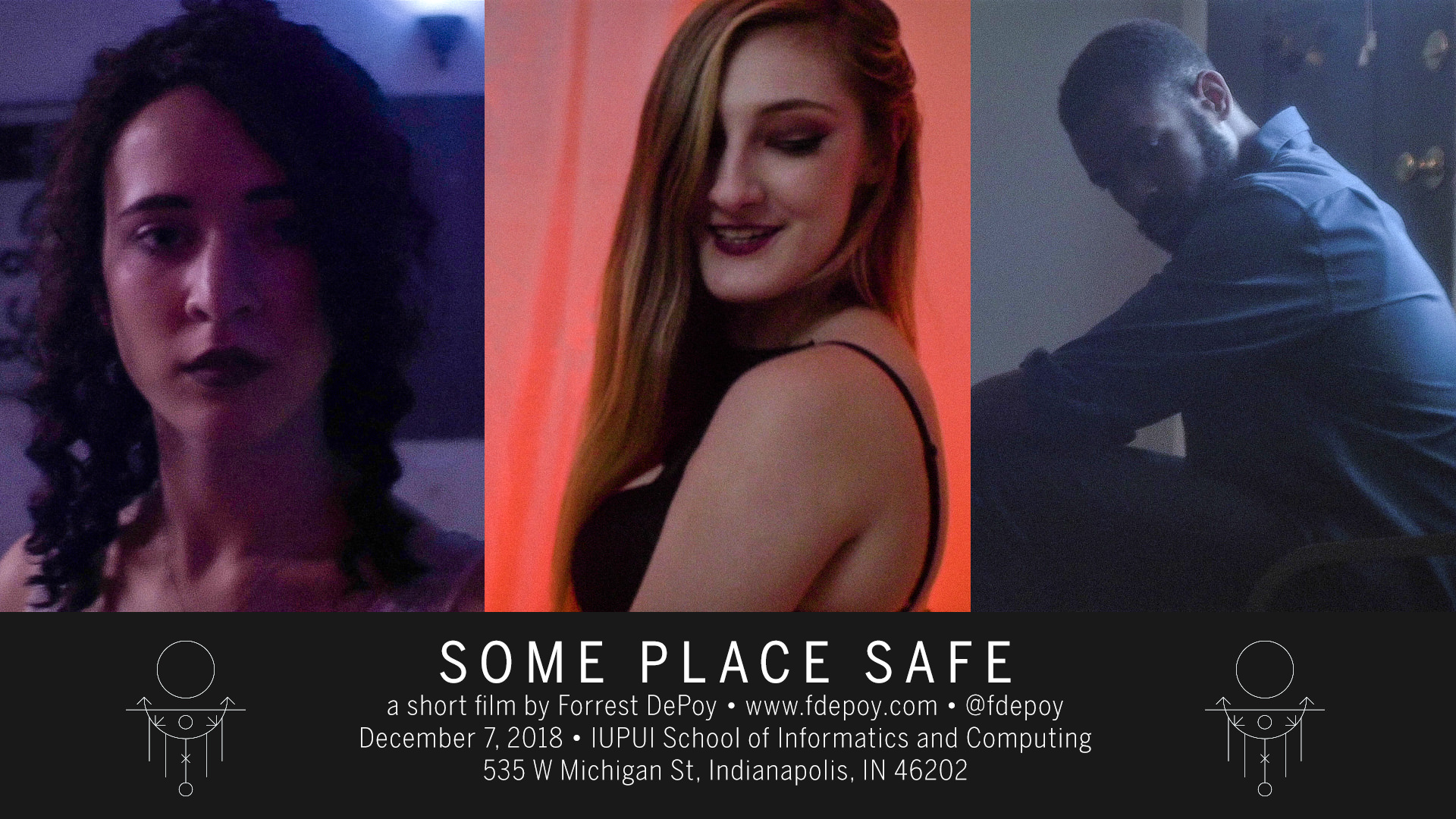 Some Place Safe is an eight minute horror thriller about a training swordswoman that leaves her abusive boyfriend for woman with hidden ties to the dark arts. Starring Samantha Angelina, Isabelle Hanson, and David Carter-T.

This is my fall 2018 college senior capstone film which will debut December 7, 2018 at the IU School of Informatics and Computing at IUPUI in Indianapolis. The exact time of the screening is still to be determined. There is NO COST to get into the event, so please feel free to invite any guests to the screening. If you plan on going, please RSVP here on this Facebook events page.

Since my last blog post in May 2018, I had taken lots of time to think about how I wanted to finish off the end of my academic career. A number of script ideas were produced but were never developed further from the outline stage. One was an abstract science fiction piece in the same vein of Jodorowsky’s The Holy Mountain, but it was far beyond any budget I am currently capable of affording.

Soon I was one month away from the first day of my final semester and I still had not decided on what to do for my capstone piece. Then on July 9, 2018 I wrote the first version of Some Place Safe on a whim. In a nutshell, I shared that with some folk, wrote a second draft, shared it with a professor and then got the approval to turn it into a capstone project.

There are three main characters in this short film: Viva (Samantha Angelina), a young swordswoman in training with a huge affinity for old wire-fu flicks; Lanis (David Carter), Viva’s aggressive and abusive boyfriend; and Sven (Isabelle Hanson), a mysterious older women that Viva has been in contact with who has hidden ties to the dark arts. Viva quickly falls for Sven and runs away to her place in the night with just a duffel bag of clothes and her sword.

Many different actors were considered for these roles. Originally Sven was a far older women in her 40’s-50’s, but it proved difficult to find local female actors that age willing to act for this. Eventually I casted Samantha Angelina as Viva, a performing arts student at IU South Bend and good friend, and Isabelle Hanson as Sven (after aging her down), another IU South Bend performing arts student and my partner who had also acted in my debut short film God Among Men. During the casting process, Lanis had very little character and was simply called “Boyfriend” in the script. Eventually I met David Carter through an ad I had posted online. Thanks to him, I felt inspired to make this role just a little bit more nuanced and give him a proper name.

Finally, I set the shooting dates. October 12, 13, and 14 with a small group reading and rehearsal session on the 12. For crew, I hired my colleague Paul Lanier as sound designer / recordist who I’ve worked with before and Danny Zawacki as composer (who I had met on Reddit prior and felt he had what it took to create the right sound for this). I planned on keeping this crew small, so I tasked Sam with make-up and smaller prop design, got help with some larger prop design from my friend and colleague Joshua, and had Paul bring his friend Eddie who was interested in doing some PA work.

The production rolled around quicker than I anticipated and it went as expected. Fairly smooth, but ultimately some minor details had to be cut from the final script due to time constraints. A 28-minute behind the scenes compilation has been made using an old Sony DCR-TRV340 Digital 8 camera which will be publicly released later in November, along with the trailer. The behind the scenes video show all sorts of fun stuff like prop design, production setup, personal interviews with myself, and just some general shenanigans.

In the end, I’m incredibly excited to see how all of this comes together. The rough cut was completed two days ago. Both myself, the composer, and the sound designer have until November 10 to complete final music, sound, foley, and overall look of the film, the last bit relying solely on me. After that point I put everything together, turn it in for a grade, and start burning some blu-rays for cast, crew, friends, family, and inquiring professors.

Everything came out great. The acting, the music, etc. I’ve even commissioned a professional artist to illustrate a poster for this film. I absolutely cannot wait. Stay tuned. Later in November I will be posting the trailer, the 28-minute behind the scenes compilation, possibly the soundtrack, and the poster once it is complete.

Thank you for your support.